The Mimic Octopus is a new anthology of the imitative and derivative from 13 Pages, edited by Richard Osmond and Will Harris, with illustrations by Aisha Farr.

It includes a poem by Anthony Adler which mimics the form and content of my ‘Near Extremes’ poems from School of Forgery, as well as a contribution of my own, ‘The Submission of Alan’. While most of the imitations and pastiches in the anthology are respectful, affectionate, even admiring, ‘The Submission of Alan’ is from a sequence of poems I’m writing which use the imitative mode as a form of criticism (or ‘imitation as impertinence’, as I put it when reading at the launch last night). The target of the criticism is the predilection establishment-sanctioned male poets have for writing sleazy poems about women, particularly when these are dressed up as some else, like, say, revelations about the nature of beauty.

This particular poem is a travesty or burlesque of a section of ‘Missing’ by Alan Jenkins, in which he pictures a former lover planning to betray him while she bathes. It’s from Harm, which won the 1994 Forward Poetry Prize, and which I picked up cheaply in Scarthins, Cromford. Jenkins came to my attention because he was one of the more prominent figures on the board of the Poetry Society a couple of years ago, when they managed to oust (and later, under pressure, reinstate) their director and expend worrying amounts of public money hiring a well-known law firm to spin the story in the press so that it became about two warring women who had to be separated, rather than reconfiguring the Poetry Society to serve some alternative purpose.

I’d like to write something every now and then about poems I’ve had published in the past, since at the time I hardly said anything, and because most of the online and offline publications that have posted or printed something of mine are well worth further exploration. BODY, for instance, is a seriously international publication that’s free to read and puts up performance texts and videos alongside work from poets across the world. It’s got a slick website too.

The pieces they published are only a half or a third mine, since they’re translations – in this case, of work by medieval Welsh poets Dafydd Ap Gwilym and Gwerful Mechain (the links here are to the poems). I’m (still) frustratedly monolingual, despite efforts in recent years to upgrade, so my approach to ‘translating’ poetry is this: I run the originals through Google Translate, in whole and in part, and marvel for a while over the weirdness produced. I read other translations, as many as I can obtain, and try to map parts of them to the raw automated translation. I read and reread the original texts, often aloud to myself, to try to get a measure of the rhythms and sounds employed. I read around the poem, if there’s any commentary on it, or interesting biographical information that surrounds it. Then I take my best shot, I suppose in much the same way someone might attempt a portrait from a series of colourful descriptions.

I don’t actually think dead-on accuracy matters that much. Translations of poetry are always necessarily defective as pure translations, so their purpose must be to create something new – albeit related. It’s more worthwhile to think of them as collaborations of a sort, or ‘reimaginings’, to borrow the cinematic term. It turns out, for instance, nearly everyone else has a preferred translator of Celan which differs from mine – I like the Ian Fairley versions to the point where I can hardly be bothered with the rest. It might be that’s because I like reading Fairley as much as (or more than) I like reading Celan.

As for these Medieval Welsh poets – well, I happened on them because I’ve been on the look-out for obscene poetry from the past and from other cultures for some time. They’re hardly obscure poets, and the poems I’ve chosen are among their most famous, but the existing translations I found are all somewhat grim and ponderous in the face of what seems (to me) to be their obvious exuberance and comic energy, so my versions attempt to bring that out, at the cost of metrical fidelity. And though the authors are separated by more than a century (Ap Gwilym was around in the 1500s, Mechain in the late 1600s), these pieces seem to go together as a pair.

I also wrote a short essay for BODY about a poem by Rimbaud in which he remarks on a barmaid’s ‘enormous tits’, which seems not entirely unrelated. 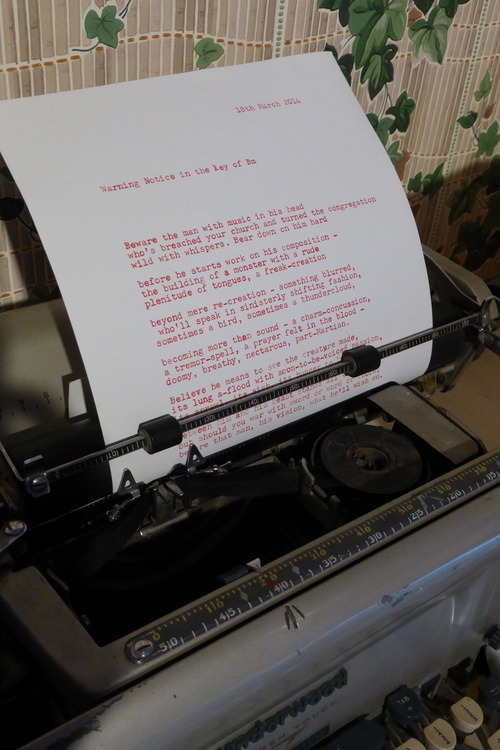