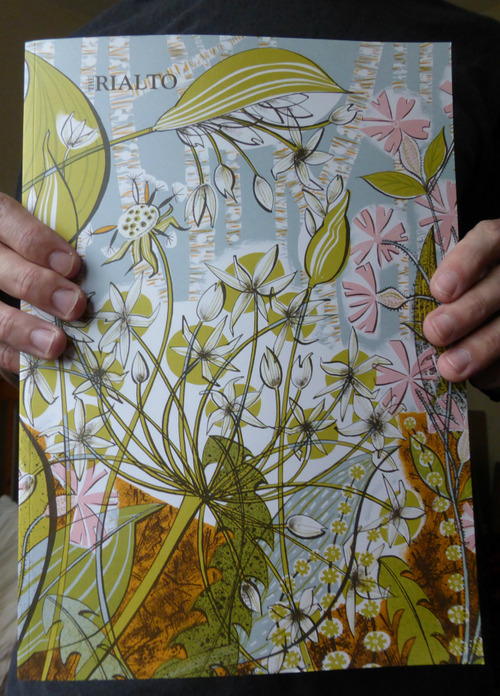 A poem of mine, Mifune, is published in issue 80 of The Rialto, which is available to order from here. The first thing I’d like to say about this poem is that I have no plans for it to appear anywhere else, ever. It will certainly not appear in a second collection.

The second thing I’d like to say about it is that it’s about Toshiro Mifune, an actor best known for appearing in Kurasawa movies and for channeling animalistic rage and petulance. His characters were often moody, wildly unpredictable, frenetic and dangerous. I’ve imagined him as a malevolent spirit caged in film reel. I wrote the poem one afternoon in the Genesis cinema in Whitechapel because I was thinking of entering a competition and didn’t have anything else suitable.

The third thing I’d like to say about it is that I submitted this, along with a few other poems, to The Rialto upon being kindly invited to do so by Fiona Moore, who shared editing duties on this edition. These days I very rarely submit anything to any publication without being invited to do so. This isn’t because I’m confident of being asked; it’s because I have very little idea how to go about selecting work for submission to any magazine that lacks a particular remit. I enjoy putting together selections for smaller projects that have a narrow specification – like The Mimic Octopus – but well-known journals like The Rialto, The Poetry Review and Poetry London, which exist to publish ‘the best’ poetry, leave me in a state of some perplexity. What is it they want exactly? Their own editors regularly admit to not knowing, via the various interrogations they’re submitted to. Guidelines will sometimes suggest you read the journal first to get an idea of what they publish, but that leaves me none the wiser – some good poems, some poor ones, usually, with little uniformity of character. (Isn’t it inexplicable and endless variation that adds up to blandness, rather than arch-regularity, which is beautiful, if menacing?)

I don’t know for sure why I get hung up on this issue of specificity, but I think it has something to do with wanting to know what I’m applying to be part of. If I’m invited, well, at least that means someone has some idea, presumably, that they would like me to be part of this thing they are working on, and that’s good enough for me. But in the past, when I did send poems off more freely, I remember the strange anticlimax – the feeling of almost having cheapened myself – when some freak creation of mine would be accepted and made to sit among so many others without any particular relationship to them, like a poor shy kid thrown into a new school. People sometimes talk of ‘finding a home’ for their poems. I don’t think being published somewhere is the same thing.

But this poem, Mifune, didn’t fit in with any of my other poems anyway, so it’s nice that he gets to hang out somewhere.